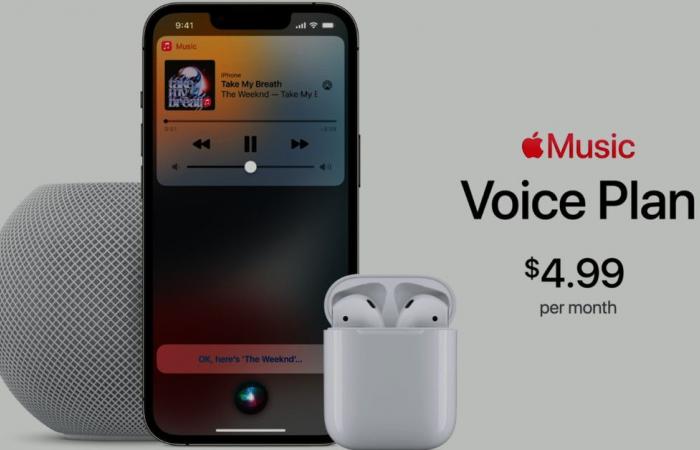 Apple Music Is Launching a Voice-Only Siri Plan For $4.99 per Month – Apple is creating a new Apple Music plan that will be half the price of its normal individual subscription and will be available solely through Siri, with the goal of increasing sales of Siri-enabled products.

Apple Music Voice will cost $4.99/month, launching in 17 countries this fall. It will let listeners launch any song (choosing from more than 90 million tracks), pick from hundreds of preset playlists, and access Apple Music Radio using only Siri voice commands, with full playback controls including unlimited song-skipping through Siri, the tech giant announced. (Users will be able to use the Apple Music app to control, but not initiate, playback).

However, Apple Music Voice will lack certain features — including the ability to create your own playlists.

The new Apple Music Voice plan is designed to boost sales of the company’s lineup of Siri-enabled products. Once subscribed to the Apple Music Voice Plan, users can request music be played across all of their Siri-enabled devices, including HomePod mini, AirPods, iPhone or any other Apple device, and when using CarPlay.

The launch of Apple Music Voice also looks to be a counter to Amazon Music Unlimited’s $3.99/month plan that provides access on a single Echo or Fire TV device.

CHECK ALSO: List of Secret MTN Codes You Must Know

“Apple Music and Siri are natural partners and already work seamlessly together,” Oliver Schusser, Apple’s VP of Apple Music and Beats, said in a statement. “With Siri actively used on hundreds of millions of devices worldwide, we are thrilled to add this new plan that delivers an effortless music experience just by using your voice and makes Apple Music accessible to even more people around the world.”


Subscribers with the Apple Music Voice plan will get suggestions based on their music preferences and have access to a queue of recently played music through Siri. Within the app there will also be a dedicated section called “Just Ask Siri” where subscribers can learn tips to optimize Siri for Apple Music.